A hat is a head covering which is worn for various reasons, including protection against weather conditions, ceremonial reasons such as university graduation, religious reasons, safety, or as a fashion accessory.[1] In the past, hats were an indicator of social status.[2] In the military, hats may denote nationality, branch of service, rank or regiment.[3] Police typically wear distinctive hats such as peaked caps or brimmed hats, such as those worn by the Royal Canadian Mounted Police. Some hats have a protective function. As examples, the hard hatprotects construction workers’ heads from injury by falling objects and a British police Custodian helmet protects the officer’s head, a sun hatshades the face and shoulders from the sun, a cowboy hat protects against sun and rain and a Ushanka fur hat with fold-down earflaps keeps the head and ears warm. Some hats are worn for ceremonial purposes, such as the mortarboard, which is worn (or carried) during university graduation ceremonies. Some hats are worn by members of a certain profession, such as the Toque worn by chefs. Some hats have religious functions, such as the mitres worn by Bishops and the turban worn by Sikhs , dated to around 3200 BC. Hats were commonly worn in ancient Egypt. Many upper-class Egyptians shaved their heads, then covered it in a headdressintended to help them keep cool. Ancient Mesopotamians often wore conical hats or ones shaped somewhat like an inverted vase.

Hats as an indicator of social status: A foreman (with horse) wears a hat of greater height than the accompanying inquilino (19th-century Chile).

Other early hats include the Pileus, a simple skull-like cap; the Phrygian cap, worn by freed slaves in Greece and Rome (which became iconic in America during the Revolutionary War and the French Revolution, as a symbol of the struggle for liberty against the Monarchy); and the Greek petasos, the first known hat with a brim. Women wore veils, kerchiefs, hoods, caps and wimples.

Like Ötzi, the Tollund Man was preserved to the present day with a hat on, probably having died around 400 BC in a Danish bog, which mummified him. He wore a pointed cap made of sheepskin and wool, fastened under the chin by a hide thong.[8]

St. Clement, the patron saint of felt hatmakers, is said to have discovered felt when he filled his sandals with flax fibers to protect his feet, around 800 AD.[9]

In the Middle Ages, hats were a marker of social status and used to single out certain groups. The 1215 Fourth Council of the Lateranrequired that all Jews identify themselves by wearing the Judenhat (“Jewish hat”), marking them as targets for anti-Semitism.[10] The hats were usually yellow and were either pointed or square.[11] 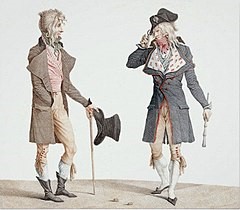 Carle Vernet’s 1796 painting showing two decadent French “Incredibles” greeting each other, one with what appears to be a top hat, perhaps its first recorded appearance.

In the Middle Ages, hats for women ranged from simple scarves to elaborate hennin,[12] and denoted social status. Structured hats for women similar to those of male courtiers began to be worn in the late 16th century.[13] The term ‘milliner’ comes from the Italian city of Milan, where the best quality hats were made in the 18th century. Millinery was traditionally a woman’s occupation, with the milliner not only creating hats and bonnets but also choosing lace, trimmings and accessories to complete an outfit.[14]

In the first half of the 19th century, women wore bonnets that gradually became larger, decorated with ribbons, flowers, feathers, and gauze trims. By the end of the century, many other styles were introduced, among them hats with wide brims and flat crowns, the flower pot and the toque. By the middle of the 1920s, when women began to cut their hair short, they chose hats that hugged the head like a helmet.[13]

Extravagant hats were popular in the 1980s, and in the early 21st century, flamboyant hats made a comeback, with a new wave of competitive young milliners designing creations that include turban caps, trompe-l’oeil-effect felt hats and tall headpieces made of human hair. Some new hat collections have been described as “wearable sculpture.” Many pop stars, among them Lady Gaga, have commissioned hats as publicity stunts.[17]

A hat shop from about 1900 inside the Roscheider Hof Open Air Museum.

One of the most famous London hatters is James Lock & Co. of St James’s Street.[18] The shop claims to be the oldest operating hat shop in the world.[19] Another was Sharp & Davis of 6 Fish Street Hill.[20] In the late 20th century, museums credited London-based David Shilling with reinventing hats worldwide. Notable Belgian hat designers are Elvis Pompilio and Fabienne Delvigne (Royal warrant of appointment holder), whose hats are worn by European royals.[21] Philip Treacy OBE is an award-winning Irish milliner whose hats have been commissioned by top designers[22] and worn at royal weddings.[23] In North America, the well-known cowboy-hat manufacturer Stetson made the headgear for the Royal Canadian Mounted Police and the Texas Rangers.[24] John Cavanagh was one of the notable American hatters.[25][self-published source] Italian hat maker Borsalino has covered the heads of Hollywood stars and the world’s rich and famous.[26]

YOU CAN RELY ON US

to deliver a quality product, on time and within budget

SAVE TIME AND MONEY

order directly from us for quantities over 150

the whole process and offer quick turnaround from manufacture to branding

Hat City is our retail wholesale factory shop in Fordsburg, Johannesburg where you can buy our quality, generic, off the shelf hats and caps at discounted prices